Construction continues to increase on Calyer Place, a nearly one million square foot residential development on the Greenpoint waterfront in Brooklyn. Designed by Cooper Robertson & Partners with SLCE Architects as the reference architect, and developed by M&H Realty LLC, the project includes a pair of 40-story towers as well as 32- and 22-story siblings, and will produce approximately 700 000 square feet of residential space with 700 apartments, as well as 10,000 square feet of commercial space, 7,160 square feet for unspecified community use and over 600 parking spaces. The grounds once housed the historic Greenpoint Terminal Market, which suffered a ten-alarm fire and was demolished in 2017 before preparations and construction on the site began.

Since our last update in July, the tallest reinforced concrete superstructure has nearly doubled in height, as has the section of the podium on the westernmost part of the building closest to the East River. The yellow safety cocoon system and construction crane attached to the south side of the building also gradually climb as the tower begins to take shape.

Calyer Place is located in a fairly secluded area in one of the last unbuilt sections of Greenpoint, the Brooklyn waterfront, providing the development with uninterrupted 360-degree views of the entire city. 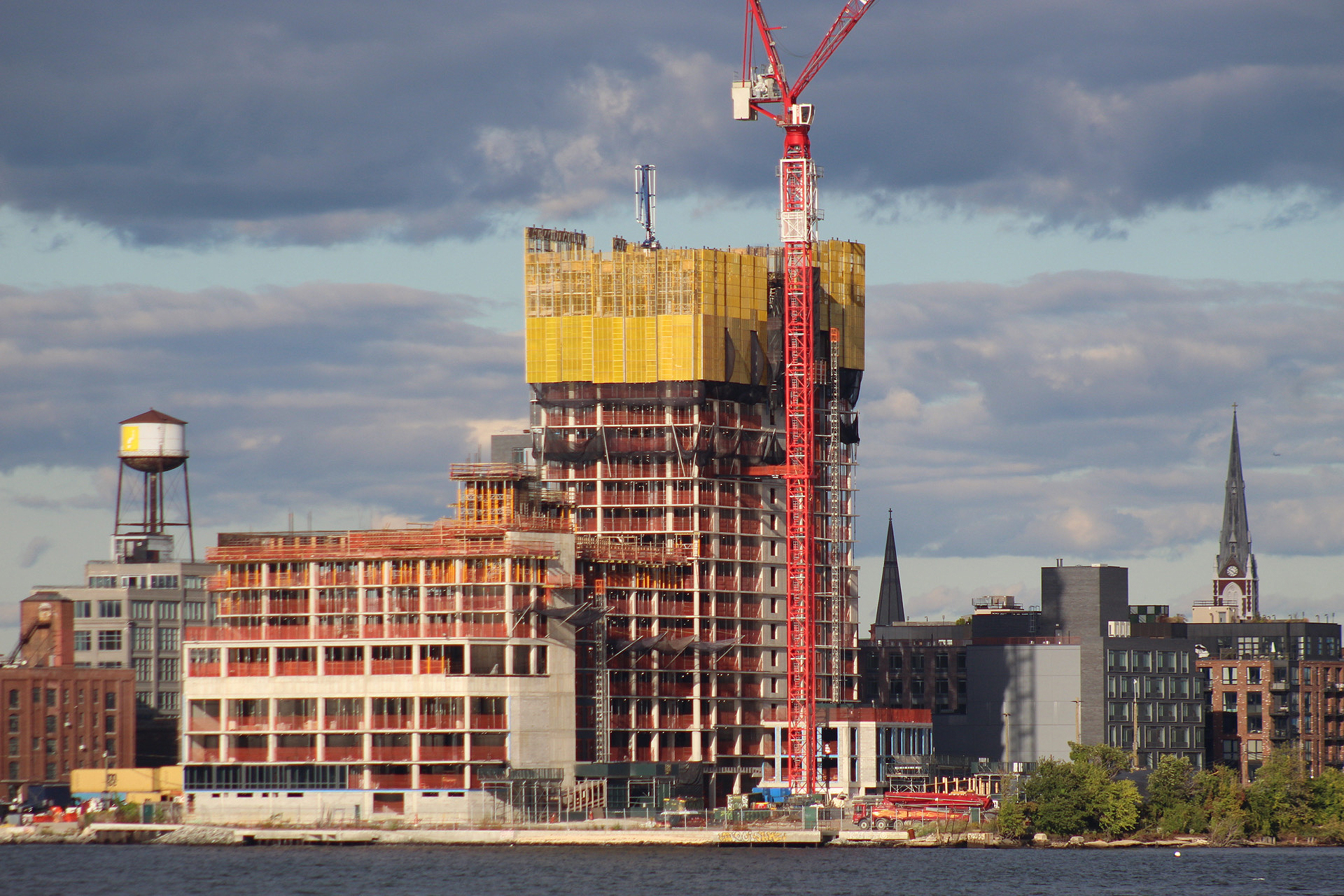 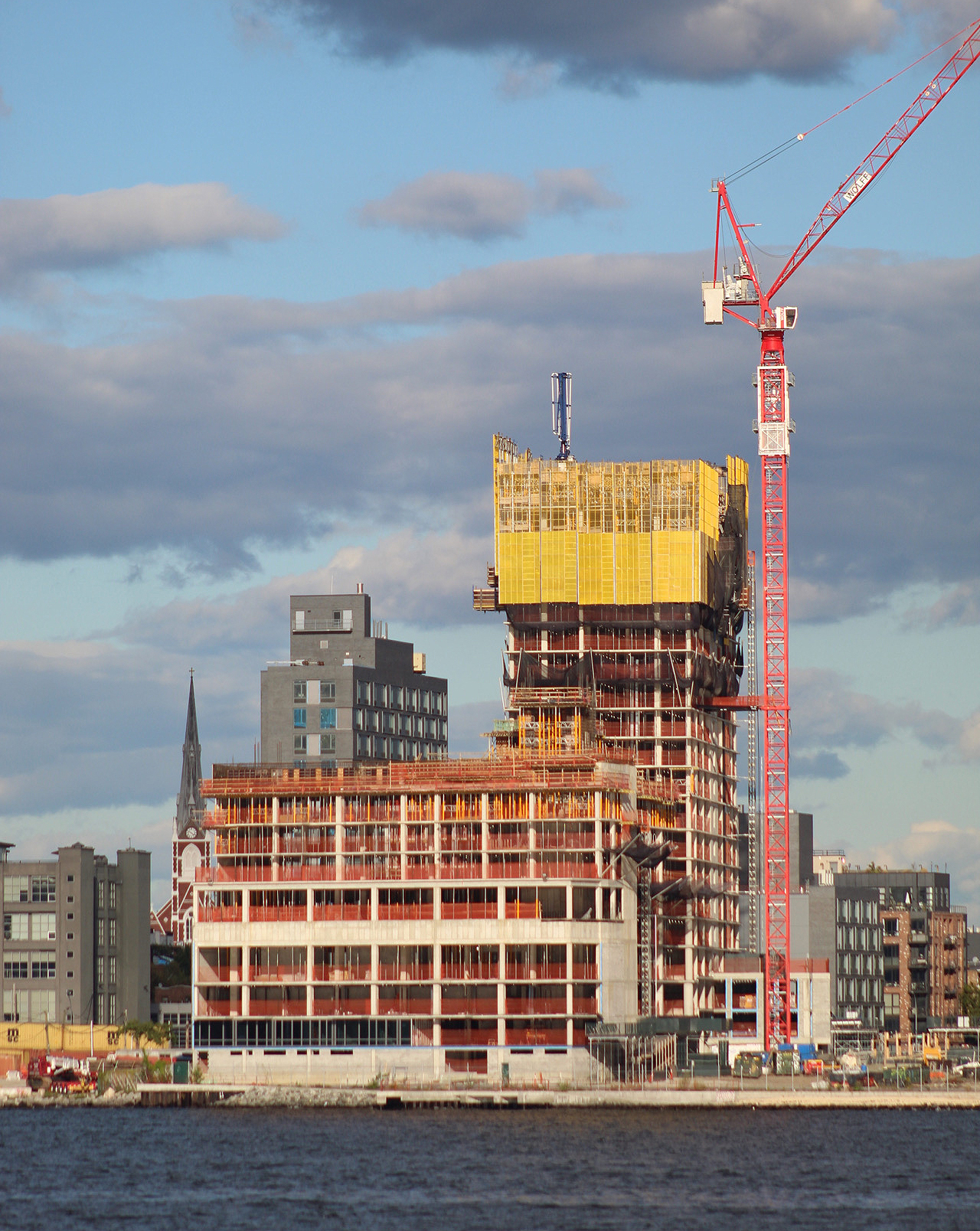 It also appears that the very first piece of floor-to-ceiling glass panels began to be installed on the west elevation. 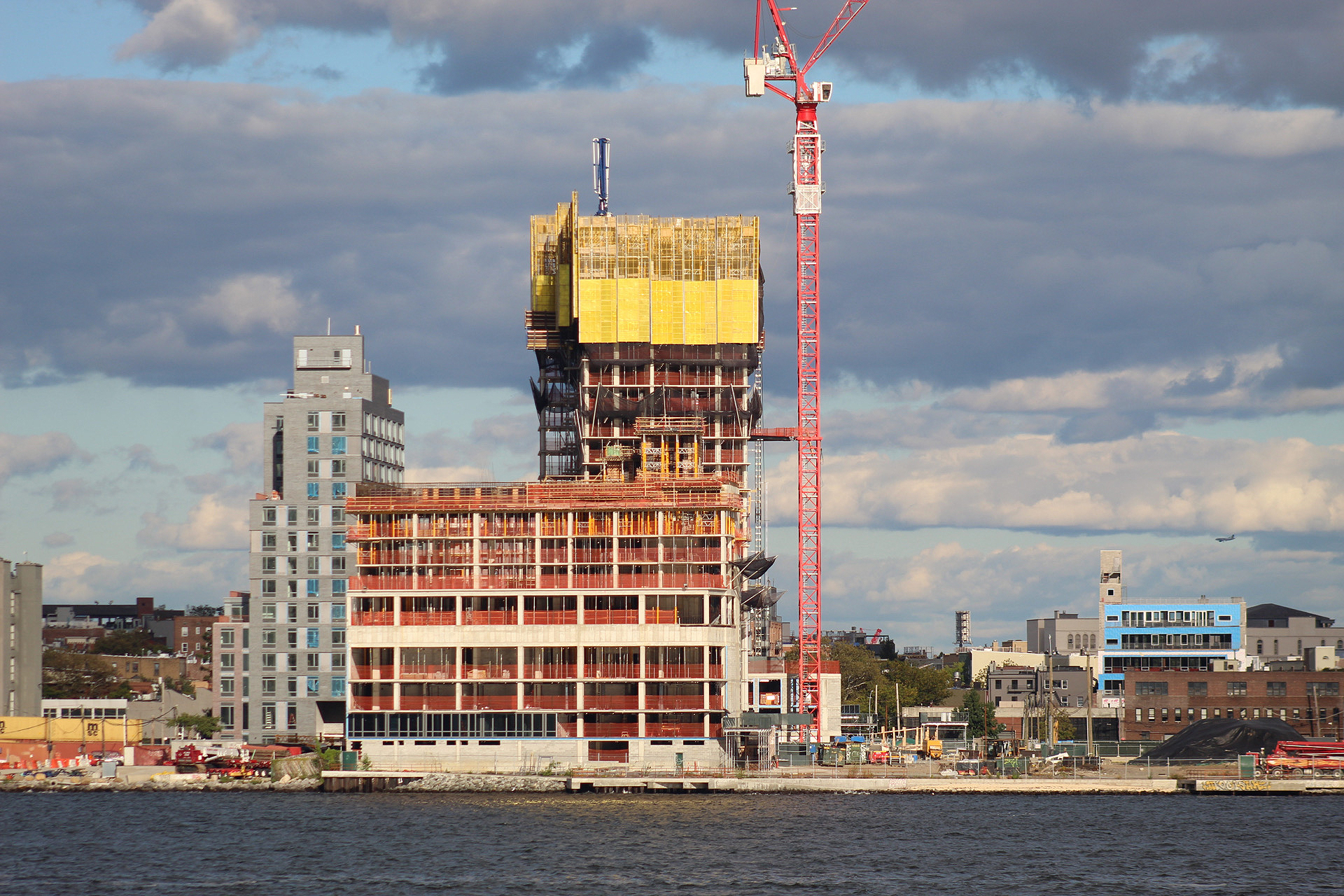 The north side of the shorter annex part of the elevated building has blank concrete walls, most likely indicating a future skyscraper that will someday cover these sides. 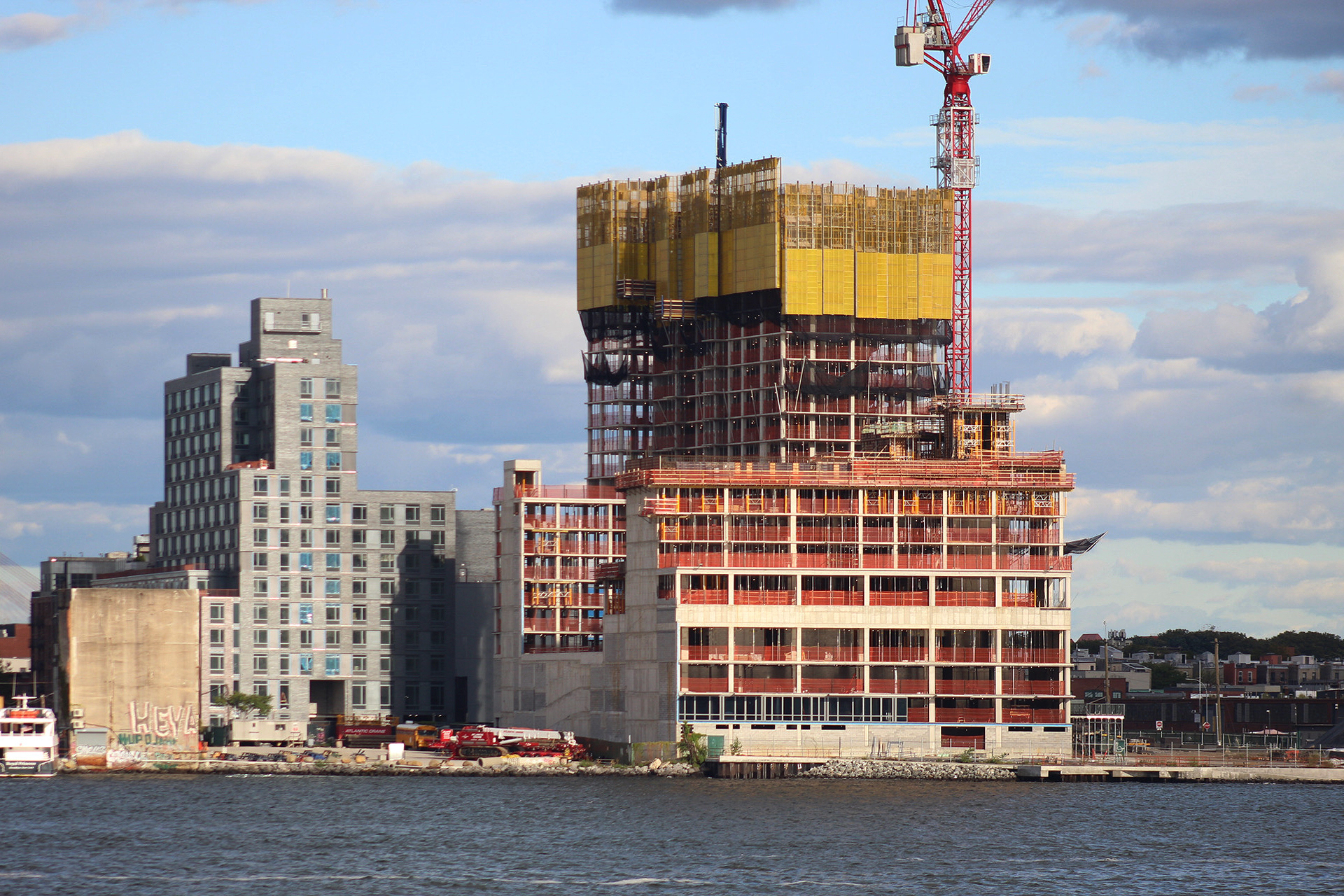 It has previously been reported that the permits for Calyer Place once provided for a total of five buildings. However, these were filed under three different addresses and were ultimately reduced to just four buildings. The addresses were 65 Private Drive, two 33-story buildings rising to 290 feet; 27 West Street, 19 and 14 story buildings 190 and 142 feet; and 37 West Street, a 14-story building rising to 211 feet. The architectural design and the number of floors also seem to have changed in recent years.

The rendering below has been seen in the past. Although dated, it still gives us a sense of the scale of each tower and its visual impact on the surrounding neighborhood and highlights the panoramic views across the East River towards the Manhattan skyline. 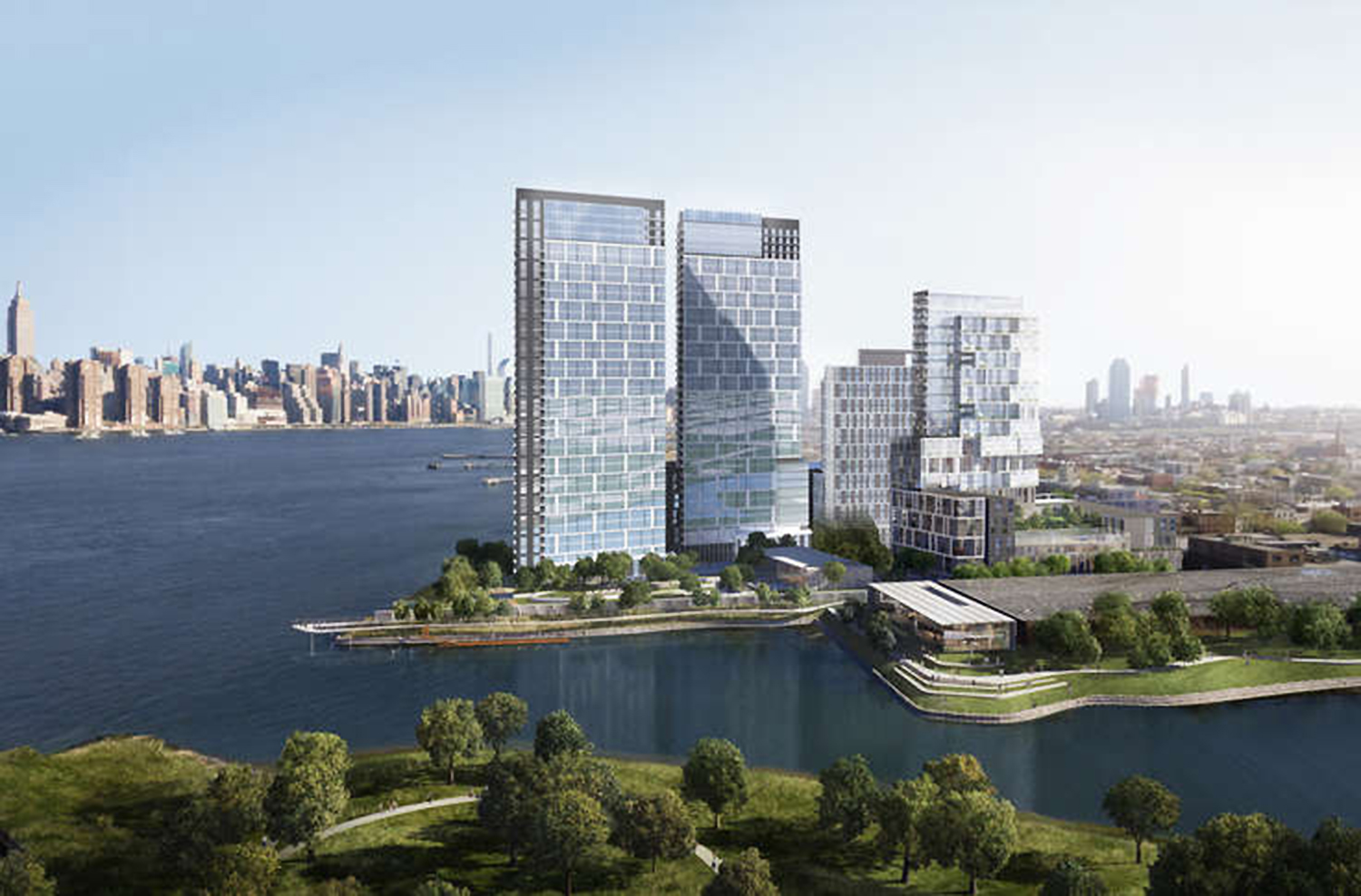 No completion date has been announced, and it will be several years before the full master plan is fully realized.