A little over a century ago, the street now known as the Magnificent Mile – lined with restaurants, shops and historic skyscrapers – was little more than a country road called Pine Street s ‘extending north of the Chicago River, which was lined with docks, wharves, factories, and railroads.

“The area we are in right now would be an area you might not want to be because it would be the heart of the industry,” said Paul Durica, director of exhibitions at the Newberry Library.

But a transformation was about to begin with the opening of the Michigan Avenue Bridge, now DuSable Bridge, in 1920, followed a year later by the Wrigley Building.

“Right behind the Wrigley building was a cheese factory. It was notoriously fragrant as you can imagine. Across the street, they were making soap, ”said Kathy Kulick, a teacher at the Chicago Architecture Center.

The area might have seemed like a strange place to set up a skyscraper for some, but for chewing gum mogul William Wrigley Jr., it was a masterstroke from a master of the promotion.

“William Wrigley, you know, was a man with a lot of energy,” said Durica. “I don’t know how he did everything he did because he was running this business, which was a global business, right? But then he also managed a baseball team.

The Wrigley Building was the first skyscraper north of the river. Designed by architects Graham, Anderson, Probst and White, it was part of the City Beautiful movement, a style born out of the very popular classically inspired “white city” of Daniel Burnham at the 1893 World’s Fair in Chicago.

“That’s just what really attracted people, you know, even though we were a relatively new country, you know, still our flagship, what we came back to was Europe,” Kulick said. “So we wanted those old styles, we thought that was what showed importance”

The glossy exterior looks all white, but there are actually six slightly different shades of glazed terra cotta tile to draw the eye upwards.

“The bottom here has a little blue in it, it’s a little darker and then as it goes up they add more and more lighter color until all the way up. , it’s the shiny white tower that is visible from afar, ”Kulick said.

Pine Street, now North Michigan Avenue, is located slightly further east than South Michigan Avenue. This meant the bridge had to be built at an angle, creating a gentle jog down Michigan Avenue that gave Loop shoppers and businessmen alike unobstructed views of Mr. Wrigley’s building. A few years later, he built the second part of the Wrigley Building, connecting the two by a bridge.

The building is encrusted with classic ornaments, from the bottom of the skyscraper to the top, even on the roof – an area most people will never see. 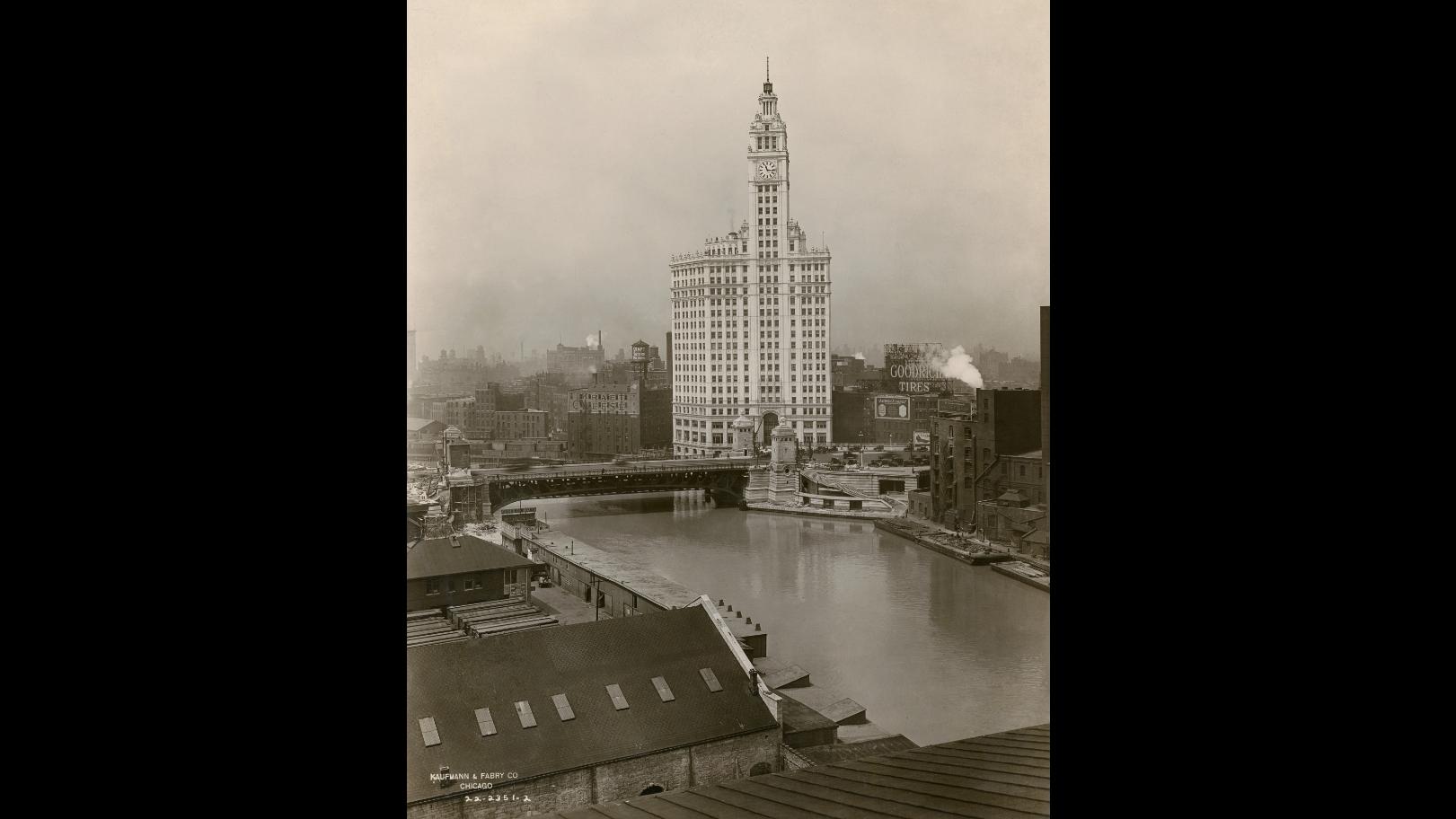 (Courtesy of the Chicago History Museum)

In addition, at the top of the building is its iconic clock tower.

“At the top of the tower you see a clock face and that clock face is worth about two floors of the building itself, but it’s fully electric,” Durica said. “It keeps the weather almost perfect. This is becoming an important way for Chicagoans to find their way around.

The clock also gave passers-by another reason to look at the Wrigley Building.

The clock tower was inspired by the steeple of the Cathedral of Seville in Spain, which was originally a minaret when the cathedral was a mosque.

During daylight saving time, changing the time on the clock – which has four faces – is a team effort, said Bradley Borowiec, vice president of The Wrigley Building.

“We have to do it the old fashioned way with radios and make sure someone calls and says, ‘OK, it’s this time. What time do you see? And then we’ll move it, ”Borowiec said.

Above the clock was an observation platform – each visitor received a piece of Wrigley gum. It was yet another part of Wrigley’s strategy of using the building to promote his business, in an almost subliminal way.

“The name of the Wrigley Building is not on the building, but you can see its building just about anywhere in the city of Chicago,” Durica said. “It stands out and dominates the landscape. “

Wrigley even made sure the building would stand out after dark, lighting up its exterior from day one.

The building is currently revamping its lighting system from around 100 lights to 300, but since the lights will be LED, its energy use will drop by 60-70%, Borowiec said. 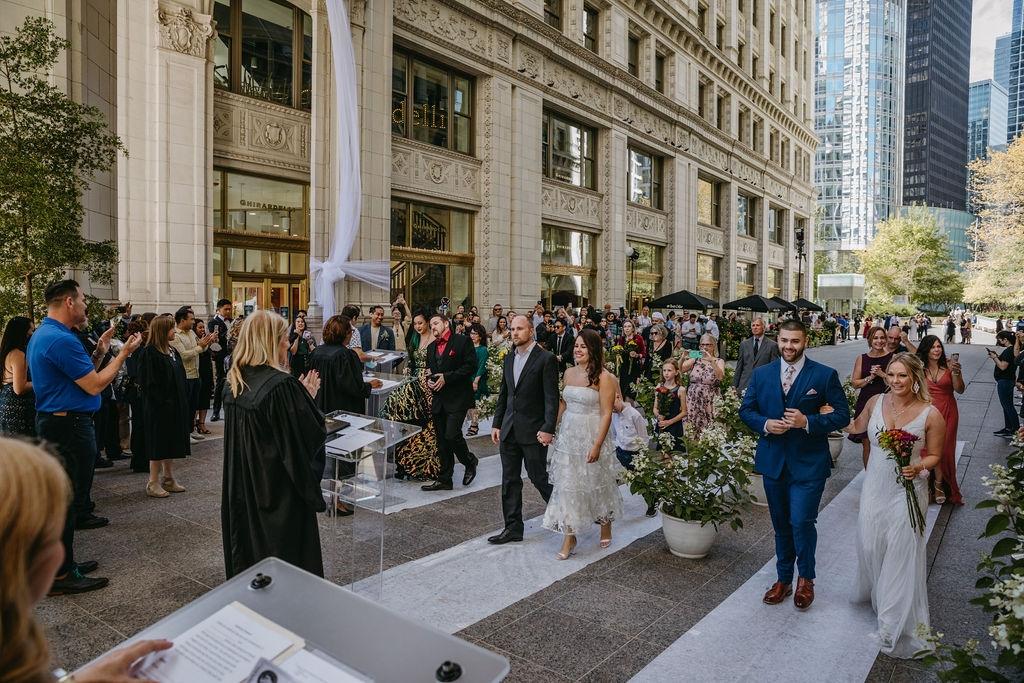 The Wrigley family sold the building in 2011. In William Wrigley’s mind, the current owner of the building went out of his way to celebrate his 100th birthday, including a promotional stunt Wrigley would probably have loved. The owners organized a competition for 100 people to marry in the building.

“People really wrote these beautiful essays about what the building means to them, something intangible,” Borowiec said.

Today, the Mag Mile is once again at a critical point in its history. As more consumers shop online and department stores close their stores on the avenue, some say the iconic street needs to be redesigned.

“I think what we’re trying to see now is what we can do to make it more experiential,” Borowiec said. “Like something that you can go down and not just go in and shop and buy something, but experience something.”

This includes the Starbucks Roastery, an ice cream museum slated to open in the Tribune Tower, and attractions offered at vacant stores based on Harry Potter and King Tut. But, as Michigan Avenue adapts, the Wrigley Building will continue to be a gateway.

“It remains as an important landmark here on Michigan Avenue that makes people love, stand and watch in wonder and wonder,” Durica said.

Did you know you can dig through our Ask Geoffrey archives? Revisit your favorite episodes, uncover new secrets about the city’s past, and ask Geoffrey your own questions for possible exploration in future episodes. Find it all here.

Have a question for Geoffroy? Ask him.